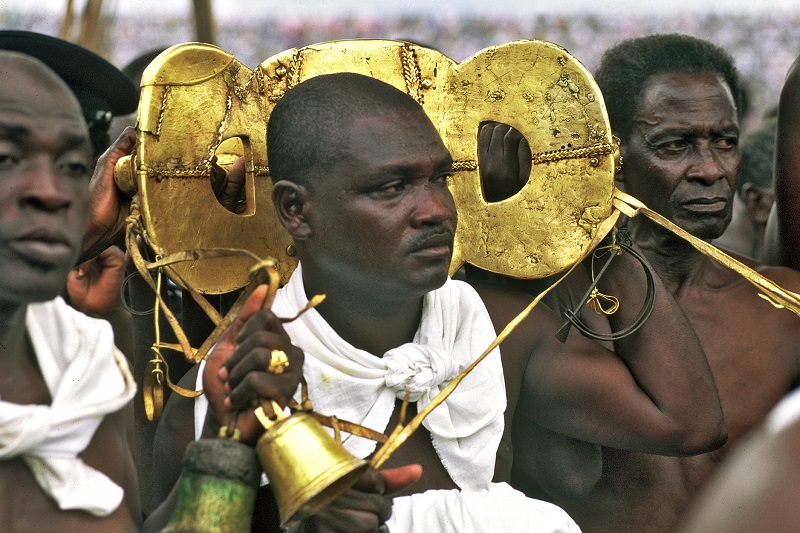 This fantastic cultural odyssey to the most remote areas of Ghana, Togo and Benin will open for you lost tribal worlds, with leaders and ancient spirits. On the coast of the Gulf of Guinea, in the heart of the Voodoo regions, we meet with sorcerers, and find out how much influence voodoo spirits have on people. We will see the villages of the tribes of the Tanek, hidden in the rocky mountains, the Tamberg with fabulous clay castles, the kingdom of Ashanti in the Kumasi forests. We end our tour by exploring the Gold Coast with the largest European fortresses in Africa, where gold and slaves were traded. Indeed, this tour is an impressive opportunity to discover the rich heritage of the tribes, kingdoms, festivals and ceremonies in West Africa.

Each ride includes either the Akwasidae festival or the Egun festival.

Aquasai Festival (Ghana). In the Ashanti calendar, certain days are set aside each year for a special celebration at the Royal Palace in Kumasi. This traditional ceremony takes place in one of the last African Kingdoms, which has preserved its ancient rituals so far.
During this holiday, the king sits under an impressive colorful umbrella, is decorated with bright fabric and massive centuries-old decorations (gold jewelry and Ashanti masks are considered masterpieces of African art) and is surrounded by elders and Ashanti advisors, all under the authority of the Royal Speaker, who holds the symbols of power. Before the king, a narrow passage was also formed for dignitaries representing all the roles and positions of power in the kingdom: holders of swords and knives, armed guards, carriers of beautiful ostrich feather webs, and so on. The ceremony then proceeds with a procession of the royal court that bring gifts, the storytellers tell the story of Ashanti kings, the drummers & the trumpeters play ivory horns. Fat dancers in bright red costumes perform an erotic dance. The mother queen also joins the ceremony with her attendants. We will witness the splendor, taste and atmosphere of one of the last great African monarchs of the forest.
Akwasidae, races: April 12, July 5, August 16, September 27, November 8
Very important: a tour with April 12th will be special.
The people of Ashanti will celebrate the 20th anniversary of the reign of their king with a big festival.

Egun masks (Benin) . Egungun is a powerful secret masked society. Egunsky masks are a reincarnation of the dead people. The masks are impressively painted, covered with many pieces of fabric of red shades. They come out of the forest and form a procession through the streets of the village, jumping to any stupid spectator who dares to get too close. And no one wants Egun to touch him, because any contact carries the danger of being infected with death. When the masks arrive, they perform a kind of bullfight, designed to scare the crowd, but in fact they are actually met with a burst of laughter! December 27th arrival

In addition to one of these major traditional events, tour participants will always attend the following events:
- an interesting voodoo ceremony
- an exciting dance of fire
- Ashanti ceremonies: a festive celebration dedicated to the return of the ancestor’s spirit.

• secrets of blacksmiths and sorcerers villages

• the golden kingdom of Ashanti

• In each of the programs there is a special event (the Akvasidai festival, the harvest festival of Miletus and others, depending on the date of arrival)

Payment policy
A deposit of 30% is required at the time of confirmation and the balance is due to TransAfrica not less than 14 days before the arrival of guests at the destination.
If the reservation is made within 30 days of departure, the whole amount must be paid at the time of confirmation.
Failure of the booking agent to comply with these payment terms will result in automatic cancellation of the reservation and all applicable cancellation fees will be charged. Bookings not secured by the appropriate deposit will be released.